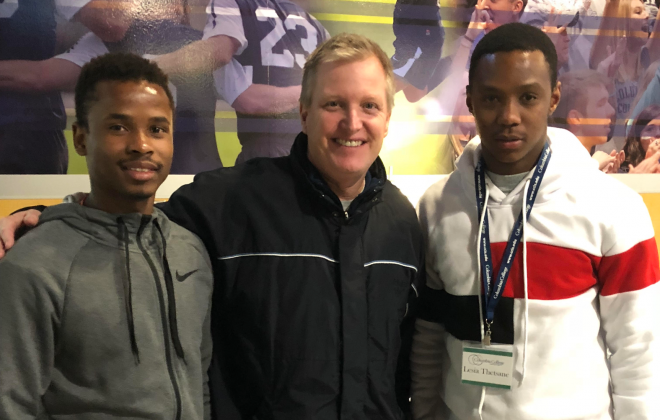 The scholars left Lesotho in August 2016 to spend two years studying and playing football on fully-funded scholarships at State Fair Community College in Sedalia, Missouri. At State Fair they have been highly successful, both academically and on the playing field, in addition to being great ambassadors for Kick4Life and Lesotho.  In 2017 for State Fair, Lesia earned all-Region first team and Missouri Community College Athletic Conference (MCCAC) all-conference first team honors and Mako earned MCCAC all-conference first team honors.  Lesia scored 3 goals and led State Fair with 8 assists while Mako was top goal scorer with 10 goals including two game winners.

In August 2018, Lesia and Mako will again be stepping up their game both academically and on the football pitch with the move to Columbia. The Columbia College Cougars Mens Soccer team ended last season ranked #7 nationally from close to 200 colleges in the NAIA Men’s Soccer Coaches’ Postseason Poll.  They finished the year with a regular season record of 19-2-3 and an incredible 22 game win streak including the playoffs, where they only lost in a penalty shoot-out to the eventual national champions. Columbia’s Head Coach since 2000 has been John Klein, pictured with the lads. John played U.S. college soccer with Duke and St Louis, played professionally both outdoors and indoors in the U.S. and believes Lesia and Mako can make a significant contribution to further success for the Cougars in 2018 and beyond.

Columbia College has an incredible history, being founded in 1851.  Today, as a private, non-profit, co-educational liberal arts and sciences college, it has grown to serving over 20,000 students a year through a variety of onsite and distance-learning programs and has over 86,000 alumni worldwide.  Although still in the early stages of planning their moves to Columbia, Lesia currently intends to major in Business and Mako in Environmental Science. They will both report to Columbia for pre-season training and start of the college year in August 2018.