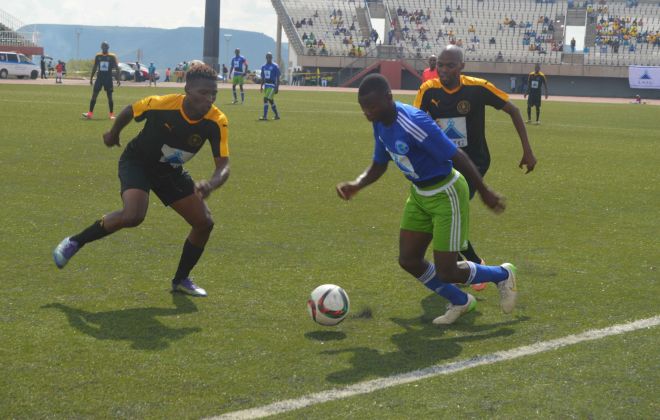 Kick4Life finished 4th in the LNIG Top8 on their finals debut over the weekend at Setsoto Stadium, with Lioli taking the title.

After losing to LCS on the semi-final on Saturday, the Old Europa side met Bantu, who lost 4-2 to Lioli, on Sunday in third place play off. The match was decided on penalties after the teams played to a 1-All draw, and Bantu won 5-3 in the shoot out, placing Kick4Life on the 4th position.

In both games, Kick4Life’s Bokang Mothoana and Moruti Thamahane were awarded Man of The Matches. Against LCS Mothoana dominated in the middle of the park and also went close to scoring on several occasions.

Likewise, Thamahane was superb at the back, marshalling Bantu strikers well and also scoring the opening goal for Kick4Life in the 49th minute before Moloisane Ramasimong came on to level matters in the second half.

Kick4Life were dealt a blow when they had to finish up the match with ten players, after Thapelo Tale was stretched off the field after pulling a muscle with fifteen minutes to play, and they had already finished with the substitutes. Bantu took advantage of the situation and got a goal with eleven minutes to go.

Speaking to his players after the match, Coach Leslie Notsi said despite the results, they should walk with their heads held up high and embrace their efforts of reaching the semi-finals.

“I know these are not the results we wanted but gentlemen lets be proud of ourselves, we went out there and made our mark. It was never going to be easy especially it being our first cup competition but we gave it our best,” he said.