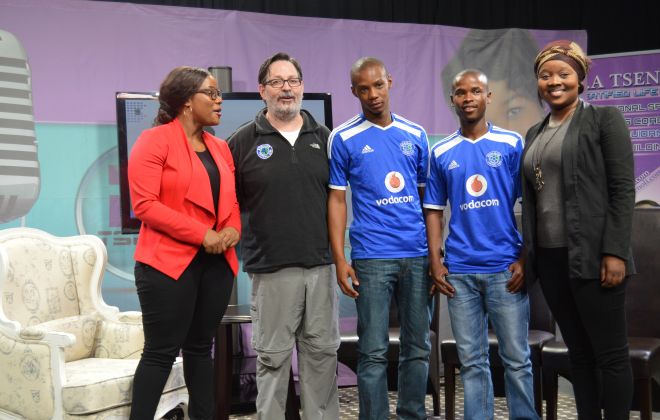 Kick4Life F.C were guests on the Limpho Tsenoli Show on Lesotho Television at the weekend, with the chance to talk about the organization’s work using sport to change lives.

Country Director Rhett Power together with Hotel & Restaurant Manager Georgina Motoboli and two first team players, Lesia Thetsane and Mako Mako Makoanyane, were the guests, where they explained the involvement of the organisation in the lives of Basotho.

“Every time when people hear of Kick4Life, what crosses their minds is football and ofcourse we understand the importance of youths participating in sports. However, that’s not only what we do at Kick4Life, we have a restaurant, conference rooms as well as the hotel,” said Power.

He went on to say Kick4Life is devoted to fighting the spread of HIV/AIDS in Lesotho and said they have tested thousands of Basotho in the country as well as training more than fifty-thousand youths in sports.

Motoboli added that all profits from the social enterprises are pumped back to the charity. She said Basotho and also people living in the country need to be aware that every time they take money out of their pockets to either buy breakfast and lunch at No7 Restaurant or book a conference room or a hotel room, that money is supporting community development.

Mako and Lesia went on to talk about their role as first team players and the importance of their position as role models, as well as discussing how being involved with Kick4Life has benefitted their own development and led to exciting opportunities.