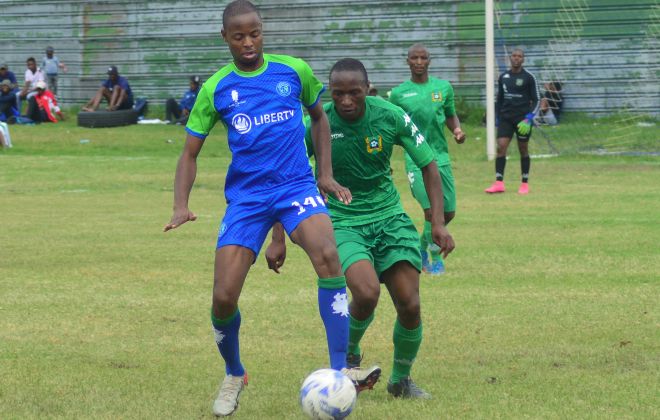 Kick4Life edged LDF 2-1 on Saturday afternoon to make it 2 wins in a row in the Vodacom Premier League at LCS grounds.

Sanele Phantse opened the scorings in the first half before Moruti Thamahane could double the lead right at the start of the second half. Ts’epo Toloane scored from the spot to secure a consolation for the visitors.

There were two changes, Kamohelo Makateng and Rapaulina Maime both started the game while Teboho Montlha and Pontso Khotso were on the bench. LDF seemed more comfortable early in the game and Mokoteli Mohapi blocked Toloane in the 7th minute. Liteboho Mokhehle was on a high alert as he was quick to come off his territory to minimise the threat in the 22nd minute.

The prevailing extreme heat conditions saw the match pausing for a short time, the referee allowing players to have water in the 25th minute. Shortly after the water break, Phantse produced something special, beautifully controlling the ball outside the box and beating Likano Mphuthi at the far post in the 29th minute.

LDF responded twice, first Mofolo striking straight at the goalkeeper in the 30th minute while Toloane missed the target just before the break.

When the game resumed from the break, Kick4Life were awarded a set piece in the 46th minute and Tanki Seoli’s beauty landed on Thamahane’s path, who made no mistake but put the ball in the net. Maime tried his luck from range but he blasted wide after the hour mark.

Seoli was unfortunate to handle the ball in the box after it hit the ground, and Toloane converted to give his side hope in the 73rd minute. When the match was about to end, LDF were presented with a chance to equalize but Makateng missed the target with a header.

Man Of the Match: Mohlomi Makhetha