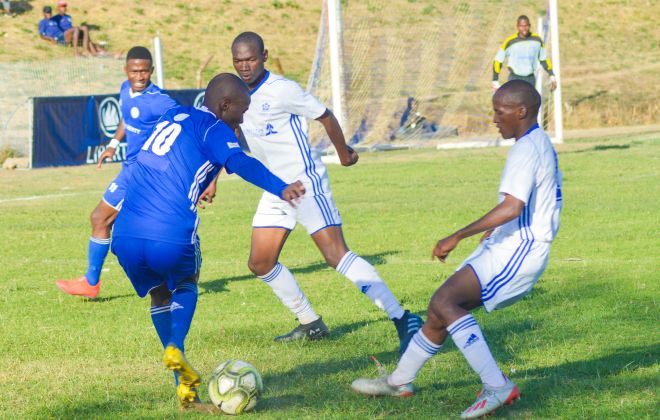 Kick4Life suffered their first defeat of the season when they lost 1-0 to LMPS at LCS grounds on Saturday afternoon.

Tanki Makhele’s 44th minute header was enough to hand LMPS their win against the Old Europa side. Kick4Life created a number of scoring opportunities but they could not put the ball at the back of the net. The notable chance came in the 6th minute when Khubetsoana Kamela made a grounder cross in the box but it only passed the goals with no one to tap it in.

Tanki Seoli also made a beautiful cross to Sanele Phantse but it was just too strong for the latter in the 14th minute. Basia Makepe was unfortunate to miss on two occasions, first missing a header then blasting at goals in the 23rd minute. Lebohang Nkieane made a superb catch to deny Robooama Koloti in the 34th minute.

Teboho Lekhooa should have capitalized from the error at the back after intercepting the ball at the 42nd minute but his efforts to chip the ball over the keeper went wide. LMPS then got a set piece in the 44th minute and Makhele rose above and headed into the net.

After the break, Seeiso Lerotholi made a run into the box with the ball but he was well marshalled by Nkau Lerotholi. Bonang Mohapi came on to add numbers in the attacking before the hour mark and moments later, he fired wide at goals.

In the 66th minute, Phantse managed to win the battle against Nkau but he missed the top corner with inches. Seeing that the game was approaching the finish line, Kick4Life were now pressing and Kamela tried his luck from range but he missed the target in the 74th minute. Leepekola Seetane was introduced late in the game but it wasn’t the day for Coach Katiso Mojakhomo’s side as they lost the game.