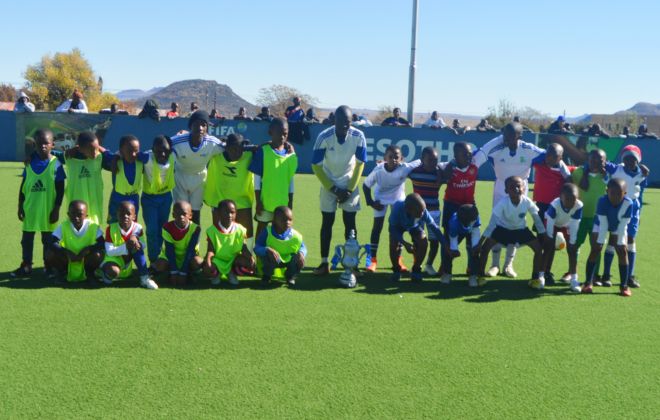 Lesotho be part of the historic world event as a Kick4Life delegation is set to leave Lesotho and participate in the 2018 Russia World Cup FIFA Foundation Festival.

The Festival, an official part of the World Cup, will take place in Moscow between June 23rdand July 3rd, and will feature 48 delegations from around the globe, coming together to celebrate the power of football for social change.

Kick4Life Media Officer Reitumetse Tlopo, who is amongst the 6 K4L delegates, said they are excited to be part of this occasion and are looking forward to having good experiences in Moscow.

“It’s an exciting moment to us at Kick4Life, it feels great to know that we will have a chance to represent the organisation and our country at the FIFA Foundation Festival. We are hoping to learn so much from this trip in terms of youth leadership skills, cultural diversity and using football to change lives,” Tlopo said in an interview with the Lesotho Television (LTV) during the morning News programme, Thahameso on Tuesday.

The delegation of Kick4Life is made up of two staff members and four football players. Kick4Life’s Country Director Hana Taiji is the Leader of the Delegation, Tlopo is the Young Leader, while the remaining four, Lebeko Moalosi, Relebohile Letsoela (both from Kick4Life Academy), Nyakallo Taole, ‘Matsukulu Motloheloa (both from Kick4Life Women’s team) are the players.

Speaking on behalf of the players, Moalosi told LTV that since joining Kick4Life at his early childhood stage, he learned so much about life and football. He also said going to Russia is a great opportunity to share life experiences with the players of his age, rub shoulders and establish friendships. He concluded by saying football alone is not enough and therefore encouraged his peers to put more effort in their studies.

In preparation for this event, the delegation organised a football3 tournament on Saturday 16th June at the Kick4Life Centre with over one hundred children from Maseru and the nearby community taking part.