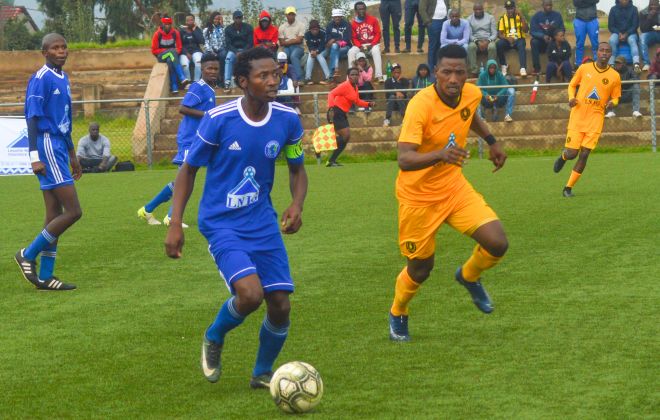 Kick4Life bowed out of this year’s LNIG Top8 cup after being defeated 3-2 (Agg 7-3) by Bantu on Sunday afternoon at Maputsoe DiFA Stadium.

It was a showdown as Kick4Life made Bantu sweat for their victory. Mongezi Mologovane opened the scorings in the 16th minute to give his side the lead. However, Bantu levelled matters soon after the 21st minute with Lazola Jokojokwane’s header.

Mologovane and Khubetsoana Kamela combined well in front of Bantu goals and nearly caused a harm to the visiting side. Tanki Seoli was marvellous to close on Lits’epe Marabe in the 34th minute. Teboho Lekhooa almost caught Bantu napping from the freekick and Seoli was unfortunate to see his header going straight into Thabo Selisa’s gloves just before the break.

After the break, Liteboho Mokhehle produced his goalkeeping heroics by denying Marabe and Jokojokwane on two occasions in the 54th minute. Bantu’s Selisa was punished for an intended foul on Mologovane in the box and the referee pointed to the spot. Kamela stepped up and gave the home side the lead once again in the 56th minute.

Bantu were also awarded a penalty moments after Kamela’s goal and Jokojokwane made it a 2-2 tie in the 59th minute. Lehlohonolo Fothoane then put Bantu upfront with a tap in, in the 65th minute. Coach Paul Westren made double changes and brought in Tseliso Botsane and Molemo Ntaote.

Just when the game was in its final minutes, Mologovane almost brought it to live once again with his spectacular turn in the box, only to miss slightly. It ended 3-2 and Bantu progressed to the next round.

Meanwhile, Kick4Life U17 progressed to the semi-finals of the same tournament after defeating counterparts Bantu U17 4-2 on aggregate earlier on Sunday. Kick4Life ladies were also in action this weekend and they played to a goalless draw with Basetsana on Saturday in a match played at Makoanyane Barracks.