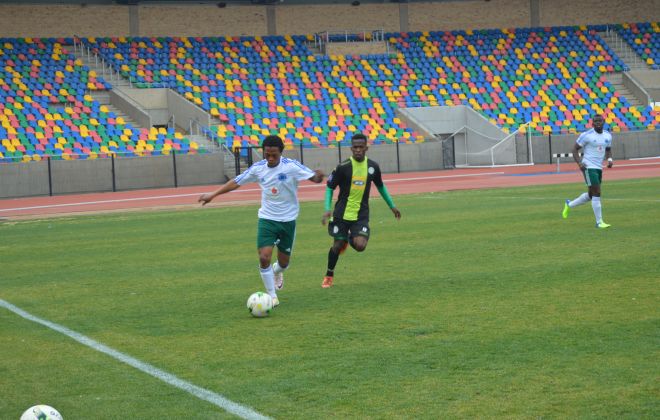 K4L aiming to wrap up first round with a win

As the first round draws to the end, Kick4Life will be looking to end things on a high note when they welcome LMPS in the Vodacom Premier League on Saturday afternoon at LCS grounds.

Saturday the 3rd sees the Premier League clubs playing their last games of the first round before going into the Christmas break. Both Kick4Life and LMPS played to a stalemate this past weekend in their respective fixtures.

For Kick4Life, to have been at the top of the standings for more than four weeks and now looking to be keeping up the pace with champions Lioli, this game is a motivation for them to finish with three points.

“They have been doing very well since the start of the season, responding positively to the pressure of being at the top of the table and for me I believe it would be something nice for them to wrap up the first round with three points,” said Coach Leslie Notsi, referring to his players.

LMPS are still without the services of hitman Tefa Makhoana who sustained a head injury against Liphakoe two weeks ago. They started the season like a house on fire but went on to slow their pace. However, they remain the team with the best defence in the country with former Matlama’s Nkau Lerotholi marshalling well at the back with Lesotho’s national team captain Basia Makepe.

LMPS complete the top five teams with 20points out of 12games. They won 5 matches, drew 5 and lost 2. In their last 7 league matches, they won only 1, lost 2 and drew 4, so coming into this game, they are chasing a win at all costs. The police side all well aware they must return to winning ways as they have been inconsistent in recent times.

In head to head, the two teams met four times in the league, both Kick4Life and LMPS have managed to claim a win and a draw in their meetings, and last season, Mohale Nkuebe scored in the last minute of the game to cancel Morapeli Lesoetsa’s first half lead.