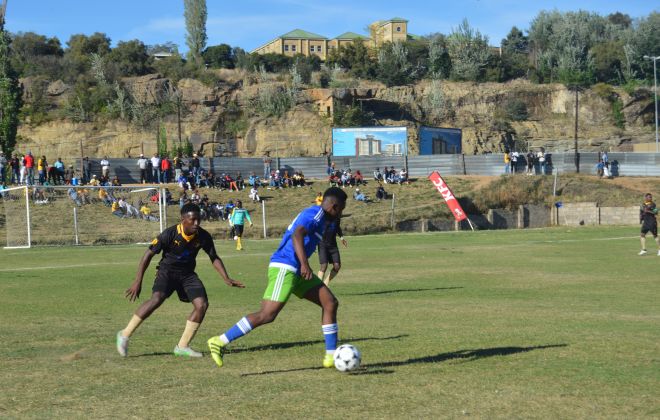 Kick4Life are aiming to spoil Bantu's title hopes and secure third spot for themselves when they head to Maputsoe on Saturday in the last fixture of the 2016/17 Vodacom Premier League campaign.

This should be an exciting fixture as Kick4Life will be looking to end the season on a high and also keep their good record against the Mafeteng side. Earlier in the first round the Old Europa side claimed a 1-0 win with Thabiso Brown scoring a first half penalty.

A win on Saturday would take K4L to a 14th win, the club's biggest margin of wins since gaining promotion three seasons ago.

Speaking at the team’s press conference earlier this week, Coach Leslie Notsi said they will do everything in their power to make sure they obtain the maximum results.

“We are aware there will be pressure because we are playing the team that is fighting for the title and they will come with guns blazing at us. However, we will be prepared for whatever that comes our way,” he said.

It is tight at the summit of VPL and Bantu will look to clinch the league title as they welcome tricky Kick4Life side. Bantu are two points ahead of rivals Lioli with “A Mats’o Matebele” having bagged 59 points and “Tse Nala” have 57. They also boast arguably the best defence with only two loses after 25 matches.

Bantu brought in the South African former Bloemfontein Celtics player James Madidilane as the head coach and he has had a great spell, making massive shakes to the team and now he is contesting for the title.

Litsepe Marabe and Hlompho Kalake are some of the players from Bantu who can influence the game. If given space, the skilful Marabe could play the dangerous passes in the box or penetrate through the defence.