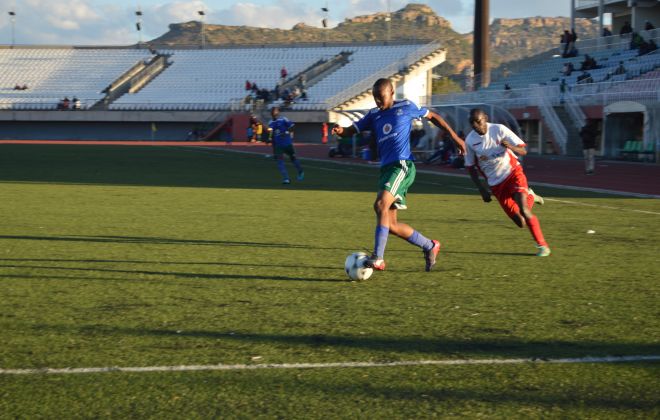 K4L aiming for 3 points in final match of season

Saturday the 14th May sees all the 2015/16 Vodacom Premier League fixtures coming to an end, and Kick4Life will head to Pitso ground hoping to pocket the full three points against the title chasers,  Matlama.

Kick4Life come into this game beaming with confidence after their 2-1 victory over Likhopo on Wednesday afternoon, thanks to goals by Morapeli Lesoetsa and Mako Makoanyane in the first half. The win saw them climbing into the fifth position where they pocket 37points, and they will be looking to make a record of three consecutive wins when they take on Matlama.

Lesoetsa’s come back proved to be a huge boost for Lesli Notsi as he increased his tally to seven goals after converting a penalty. However, fellow striker Thabiso Brown will watch the game from the stands after picking an injury (fracture) on Wednesday that forced him out of the field in the first half.

Also Thabo Masualle returns to the team on Saturday after serving a two-match suspension, and the former Lioli and Bantu man is likely to recombine with Tseliso Ramafikeng in the middle of the park.

Now looking at the hosts, after a dramatic penultimate game week, Matlama’s title hopes were restored when the leaders and also title holders Lioli FC were held to a goalless draw while Matlama beat LCS last Saturday. The results meant that Matlama are now a point behind Lioli.

They will secure their first Premier League title since 2010 if they win against fifth placed Kick4Life and Lioli slip up. Either a defeat or a draw for Lioli will see Tse Putsoa crowned champions as Moses Maliehe’s side would have finished on top of Lioli.

The combination of Motebang Sera, Jane Thabantso and Phafa Tsosane has been vital in the Matlama victories lately as the trio had been on the scoring sheets. In the first round at Old Europa, Matlama beat Kick4Life 2-0 with Mpho Matsinyane scoring with a header in the first half, and Thabantso completing the scorings late in the second half.

This is the game one would say it’s a battle of the titans, the two former national team coaches meeting in a very crucial fixture of the league.  Both Lesli Notsi and Moses Maliehe worked together at Likuena, a moment every footballer in Lesotho would recall when the national team performed well and even saw them moving up the FIFA rankings.