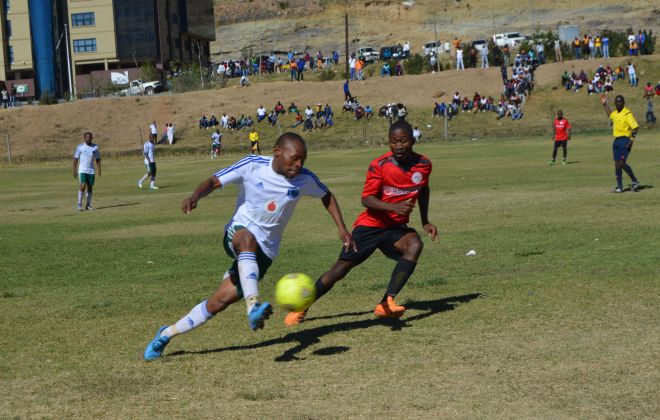 K4L aim to bounce back against LCS

Kick4Life FC will be hoping to return to winning ways on Sunday afternoon when they visit Lesotho Correctional Services FC in the Vodacom Premier League at LCS grounds.

Last Sunday, the Old Europa based outfit saw their four games winning streak coming to an end when they went 3-2 down to Sky Battalion in a highly contested affair, and they will be looking to bounce back when they take on LCS.

Kick4Life recently signed former Lioli’s striker Nkoto Masoabi, who nearly marked his debut with a goal last Sunday as his header missed the goals with inches. Masoabi could also be effective in the clash against LCS on Sunday if selected.

LCS on the other hand were held to a goalless draw by Lesotho Defence Force on Saturday and they will be keen on pocketing maximum points when they host K4L as they are on eight points with only two wins, two draws and a loss in position five.

Coach Mpitsa Marai’s midfield was boosted with the good news after Sepiriti Malefane finally got a chance to join Masheshena from Bantu. The talented Lesotho international central midfielder can also play the right back and is very effective at commanding.

LCS have also reinforced their front row with former Linare talisman Leboneng Moqecho who scored a brace against Sky Battalion and a Cameroonian forward Mark. The pair has displayed a formidable combination in the past games of LCS.

In head to head statistics since the 2014/15 season, LCS enjoys three wins record over one win of Kick4Life from four matches played between the two teams. Kick4Life however, with the solid performance they have displayed so far in the league, they stand a chance of getting maximum points.

Kick4Life will be hoping to reclaim first position in the league after dropping to second place while LCS will want to reclaim their glory after a slow start to the season, and with all this, this match is likely to be a thriller.