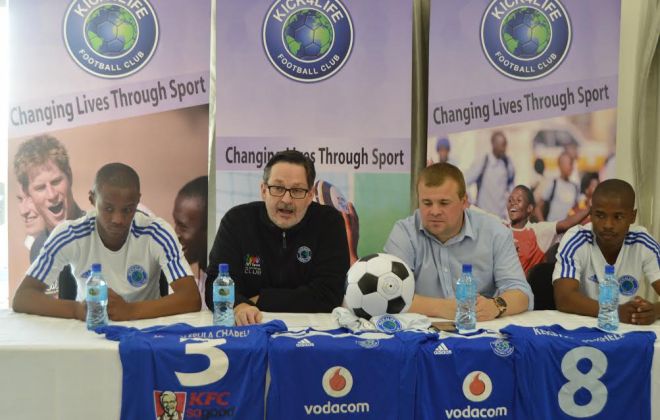 Kick4Life Academy participants Mako Makoanyane and Lesia Thetsane, both 19, left Lesotho for the United States of America on Thursday where they will spend two years studying football and chosen academic subjects. These two youngsters were earlier this year announced as the beneficiaries of a partnership between Kick4Life and State Fair Community College in Missouri that will hopefully see more young people access similar opportunities in future.

Alongside their football development, Mako will study Sciences in Engineering while Lesia will pursue Associative Arts.

Kick4Life Co-founder Pete Fleming said: "We are very excited to have our first scholars heading to the United States to pursue this incredible opportunity. Mako and Lesia have shown fantastic commitment over recent years as players in the Kick4Life first team and contributing to the wider work of the organisation in changing lives in Lesotho. We hope they can use their scholarships as a stepping stone to achieve excellence on and off the pitch, and to become change-makers in Lesotho in years to come."

Rhett Power, Country Director of Kick4Life added: "We hope this is the first of many partnerships with academic institutions in the United States and around the world through which young people from Lesotho can access life-changing scholarships."

Both Makoanyane and Thetsane rose from the ranks of the development team of Kick4Life into being regulars in the senior team and also featuring in the Lesotho U20 national team. At the 2015/16 Kick4Life F.C end of season awards, Makoanyane was named the Young Player of the Season and Thetsane scooped the Players’ Player award.

Before leaving Thetsane said: “I want to assure and promise everyone that me being in the US is not only for my sake but also for the family of Kick4Life, I will keep on working hard and not to disappoint you,”

Makoanyane  thanked Kick4Life management and the team for giving him this lifetime opportunity and promised them that it will not go to waste. He also said they are well aware that now all eyes are on them since they will be representing Kick4Life in the US, and also their country, so they will keep on being those disciplined hardworking persons.

The families of both Mako and Lesia were at the airport, along with Kick4Life staff, to wish them well in their adventure.