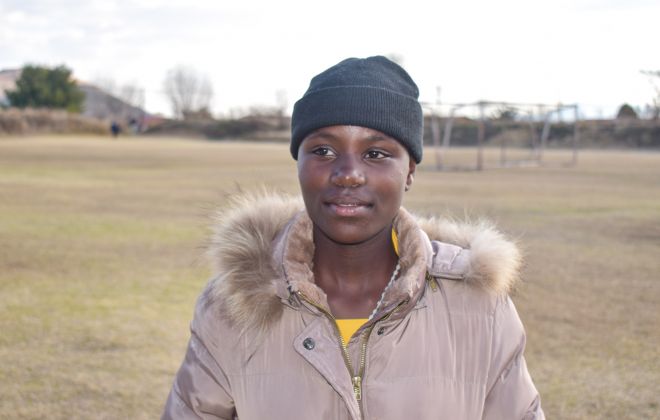 “The only answer that keeps coming in my mind, is that only I am responsible for my life. As a kid, I used to fear for the future. Now, equipped with life-skills and self-confidence, there are so many things that I have learned. I don’t go back and doubt myself like I used to."

Born and raised in the rural community of Ha-Marakabei, Tsielo Mokebe (16) moved to Ha Tsolo in Maseru with her mother a few years ago. She went through a lot growing up, trying to fit in and dreaming of a future that wasn't the norm; getting married young is how most people see success for girls in Lesotho, which remains a patriarchal society, with widespread gender discrimination. Many told her studying was for nothing and that she will end up in the kitchen like her mother. She struggled to see an alternative future.

Then, in 2019 when Kick4Life life-skills coaches visited Thetsane High School, Tsielo's life took an unexpected turn. She joined the Girls United gender rights and health education programme, learning how to stand up for herself, to resist the peer pressure and to start pursuing a future that she wanted: “Girls United lessons helped me to stand for what I believe in. I have also learned about the health issues such as HIV/AIDS, how we can interact with people living with the virus and how I can protect myself from abuse.”

Having never played football before, Tsielo also embraced the opportunity to play, encouraged by Kick4Life's Director of Programmes, Maphoka 'Puky' Ramokoatsi: “Puky invited me to train with the junior team. It was my first experience into football but my teammates made me feel welcomed. Also, because some of them attend the same school with me, it was easier to adjust”.

Although Kick4Life provided a supportive environment, Tsielo had to face a community which does not support her playing football. Boys used to tease her and girls from her village discouraged her from playing, but with the resilience she has developed through Girls United, Tsielo is determined to pursue her love of the game, and has recently been called up to the full Lesotho national team.

Puky remains proud of the Tsielo’s progress, displaying a character growth and finding her strength through football: “To think when we invited her to Kick4Life, she lacked confidence and had never played football at all, and looking at how she has progressed, being called for the national team, we are really proud of Tsielo. She is one girl with a strong character, always willing to learn and assist others. She is a leader in the group hence she was chosen the captain of our junior girls,"

'Mafifi', as they call Tsielo on the football pitch, is also resolutely pursing her academics, and currently in grade 11 at Thetsane High School, she aspires to be an accountant in the future.