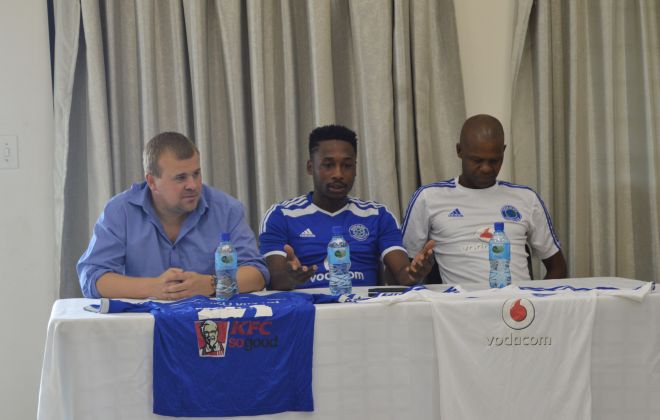 Everything went to plan - Notsi

After defeating Likila to a 2-1 victory in Butha Buthe and climbing up the log standings to sixth, Kick4Life coach Leslie Notsi praised his players for sticking to their game plan.

He said he had anticipated a tough encounter especially looking at the position of his opponents and the condition of the pitch they were using. “There were lot of things involved coming into this game, we wanted to secure our position in the top8 and the win was going to be very important. However, because our opponents have not been doing well we knew it was not going to be easy,” he said.

Notsi said he told his players to focus and concentrate, and cautioned them into getting an early goal. He went on to say he told them that most of their play should not be on their own half, pressurise their opponents and force them to make mistakes and capitalise on those mistakes.

Kick4Life got an early goal in the 20th minute of the game through Thabiso Brown who scored himself a corner kick, beautifully curling the ball into the far post to make it 1-0. In the second half, the visitors doubled their efforts in the 49th minute with Fidele Ntoya-Malonga finishing with a header from Morapeli Lesoetsa’s cross.

Brown, who increased his tally to 4 goals on weekend said he was happy to have scored as getting goals boosts his confidence in the field.

“It felt great getting a goal for my team, I like helping my team to win games, even if I don’t score but assisting my teammates to score is a good feeling,” Brown said.

During the game there were unfortunate incidents where Likila lost two of their goalkeepers from injuries and Kick4Life’s Director of Football Chris Bullock wished both Mafa and Thupane speedy recoveries from their injuries.

“We wish them speedy recoveries, we want to see them playing, helping their team and Lesotho into growing football in the country,” said Bullock.

Kick4Life host Lioli on Saturday in the Vodacom Premier League and with both the log leaders (Lioli) and Kick4Life on form, this game is surely going to be a thriller.