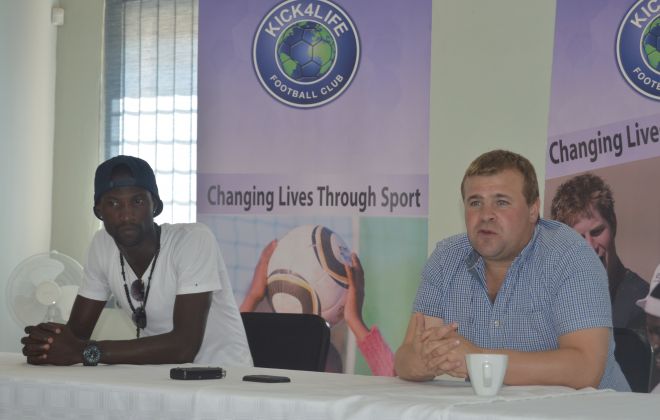 He said this during the weekly media presser on Wednesday where he said everyone was disappointed with the loss but the coach encouraged them to do better next time. “We went there hoping for a win but we lost. We were not happy with the results, everyone hoped for better and the coach told us to take it easy and focus on our upcoming game,” he said.

Kick4Life face Liphakoe on Sunday in a match that fell foul of the bad weather with the hostile conditions rendering most of the pitches unplayable, and forcing the governing body to cancel the matches, after heavy rain falls poured throughout the country last month.

Maestro, as Ntoya-Malonga is popular amongst the football fans, made a popular come back to Kick4Life, scoring a brace in his first game after spending some time with Bantu where he did not have enough game time. “I am happy with my performance because I spent most of the time not playing at Bantu and coming back to Kick4Life being given an opportunity to play means I really have to work hard, I don’t want to disappoint the coach and the team at large”.

He went on to say they are now working hard for the next game which is a much needed win in order for them to settle well in the log.

Meanwhile also at the media briefing was the Director of Football at Kick4Life Chris Bullock who expressed that the only concern left with the team is converting goals. “We are creating chances, we are just not scoring. I think we have to work more on the final third because that looks like our major problem so far,” he said.

He went on to say the boys played well but the fact that they could get into their opponents’ box without getting a goal, might have frustrated the players. “Obviously I think we lost the game when they scored us. Ofcourse every team had its fair chances but the fact that we couldn’t go through their net considering the number of times we got in their box might have had an impact on our game but we are working on it”.

Kick4Life are eighth on the log with nineteen points, seven draws and five loses and will be hoping for better results on Sunday.