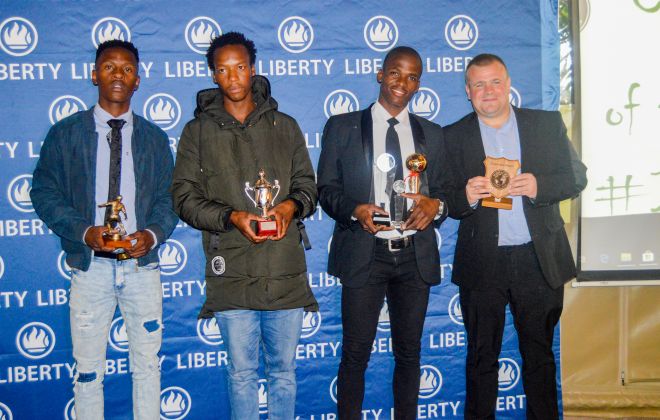 Ts’eliso Botsane was a major winner as Kick4Life celebrated 10 years of participation in Lesotho football at the club’s annual awards on Friday evening.

Speaking on these achievements, Botsane thanked the technical team and his teammates for helping him grow on and off the pitch as an upcoming player. He said he dedicates his successes to the collective responsibility amongst the team. “I would like to thank my coaches, my teammates for mentoring me in my journey as a young player, I feel so honoured to be awarded tonight. I just want to say a big thank you to the management of the club as well for the role they play in the team.”

Coach Bob Mafoso who joined Kick4Life 11 months ago said he was fully aware of the challenge ahead when he moved to Kick4Life but with the support of his technical, management and the players, they managed to overcome the hiccups along the way. He said there were times when the results were not going their way, but his players showed character and discipline.

As the club is marking a decade of football in Lesotho, Director of Football Chris Bullock looked back at the people who contributed to the success and the building of the club and thanked them for their hard work. He said the night could have not taken place in the first place if it wasn’t of such people. Bullock was also given a surprise recognition through the Chairman’s award.

There were also special recognition awards for some of the people who invested much of their times to help the club and they were as follows;

Former Coach Motlalepula Majoro who guided the club into the elite league, Leslie Notsi who helped the team play its first ever top4 competition, retired players Kabelo Solomane and Ramatsoso Mopeli who both contributed as players and managers of the club together with Refiloe Maphallela.

Captain Moruti Thamahane was also honoured as he remains the only player currently at the club who played since the A-division. Thamahane has played 133 games for Kick4Life since 2013.

The event was also graced with the notable presence of the office of the Lesotho football Association through the Secretary General Mr Mokhosi Mohapi and Premier League Management Committee through the Public Relations Officer Mr Moeketsi Ramakatsa.