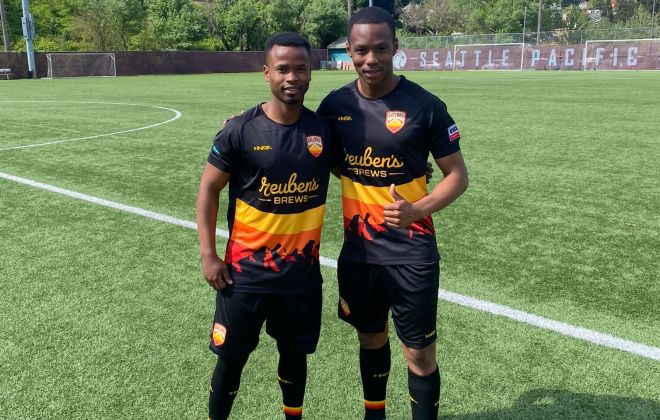 Kick4Life Academy graduates Lesia Thetsane and Mako Makoanyane spoke highly of their new club as they began their league journey this past weekend.

The duo were part of the squad as Ballard F.C kick started their season campaign with a bang, winning 5-1 against Lane United in their inaugural league match.

Thetsane led the team to its historic win, after being appointed captain and also scooping the Man of the Match accolade after his excellent performance within the 90 minutes, while Makoanyane was also involved in the second half of the game.

Speaking to Kick4Life F.C media team, Thetsane said: “It feels great to be at Ballard, the team is good, the atmosphere is exciting here, and I am happy to be part of the club,”

On his captaincy and performance on Saturday, the hard marshalling Thetsane said it was all about discipline and hard work. “Playing in the US is a test of character especially because we are far from home. I remain dedicated to my ambitions and that’s what keeps me going. I am happy we started the season on a high note, I am proud of how I conducted myself in the game, as the captain of the team. I have to put in the extra work and motivate my teammates to push harder at training and at the matches, it has been fantastic.”

Makoanyane has welcomed reuniting with his boyhood teammate at Ballard and said they are determined to achieve more at their new club: “I am proud of our progress here in the US, from the day we left Lesotho in 2016, we have been working hard at school and in the football pitch. We always kept in touch even after we signed for different teams, but I am happy that we have now reunited. We want to win titles with Ballard.”