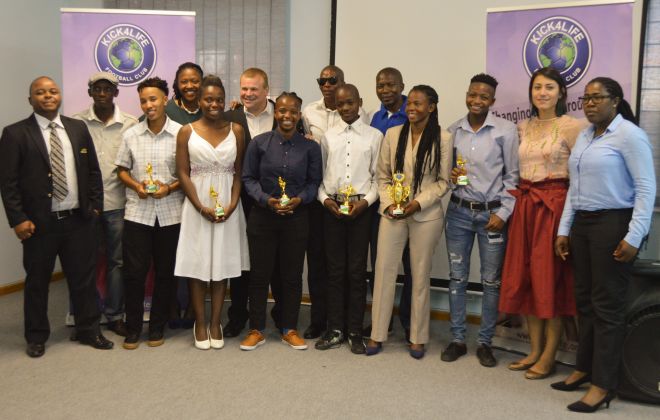 Kick4Life Ladies team held their annual football awards on Friday evening at the end of the 2017 Super League season.

The team finished runners up for the third consecutive time, missing out at LDF who were crowned champions with a game to go.

Captain Makobo Kepa said they were disappointed to miss the championship yet again: “It was a tough season for us, we lost two of our key players and we ended up losing the title but we will keep on soldiering, hopefully next season we will win it,” she said.

However, despite all these challenges, Chris Bullock, the Football Director said the manner on which the team keeps conducting themselves on and off the field makes them the best. He said there are good attributes which the ladies can take from this season.

Mosili Motsoeneng was the winner of the prestigious award for the night as she was named the “Player of the Season” and the talented Kick4Life and also national team right back expressed her gratitude.

“Ï dedicate this award to my teammates, my coaches, my family and our supporters for the love they have shown to the team and I. Being the player of the season says to me I have to put more effort in my game, I need to respect football and hope for the best,”said Motsoeneng.

Meanwhile, there were honorary awards to players who have been with the club for more than five seasons and they were awarded to Remaketse Ramohomane, Mosilinyane Lefaphane, Mating Monokoane, Nthona Mokhothu, Sebabatso Fokothi, Thato Sentje and Rethabile Ntobo. Kepa was named the Kick4Life Values Champion for her outstanding conduct both in the field and off the field.

The full list of award winners on the night were:

Player of the Season: Mosili Motsoeneng