Our team for the epic Land's End to John O'Groat's Challenge.

Find out more and join us for this incredible adventure 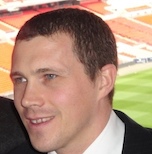 Steve is Co-founder of Kick4Life and responsible for managing the LEJOG team.

Having completed the challenge in 2017, Steve says: "It was one of the best experiences of my life and incredibly well organised by RAB. A unique way to see Britain's diverse beauty and I can't wait to do it again!"

Dave, from Southampton, is a founding trustee of Kick4Life and has visited the project in Lesotho numerous times.

He is NOT an experienced cyclist but is up for the challenge and keen to see how many different species of bird he can identify en route!

Rachael is new to cycling but enjoys keeping fit and is looking forward to the challenge of cycling the length of Britain. Rachael has supported Kick4Life before, having visited Lesotho as part of the 2014 All Stars Tour.

Greg, from St Neots, is a sports fanatic, who works for Premier Global NASM.

He runs a local youth football team as well a number of spinning classes.

Rob is looking forward to the whole experience of LEJOG, as well as exploring some of the stunning (and hilly) training routes around Munich where he currently lives.

Clive is looking forward to swapping his mountain bike for a road bike and exploring Cambridgeshire as he trains for the LEJOG challenge.

Craig is a trustee of Kick4Life in the UK and works for Google.

As a keen cyclist he is excited to be taking on one of the world's epic cycling challenges!

Nick is a trustee of Kick4Life and visited the project in Lesotho in 2019 to see the organisation's work first hand.

He is a keen runner and cyclist